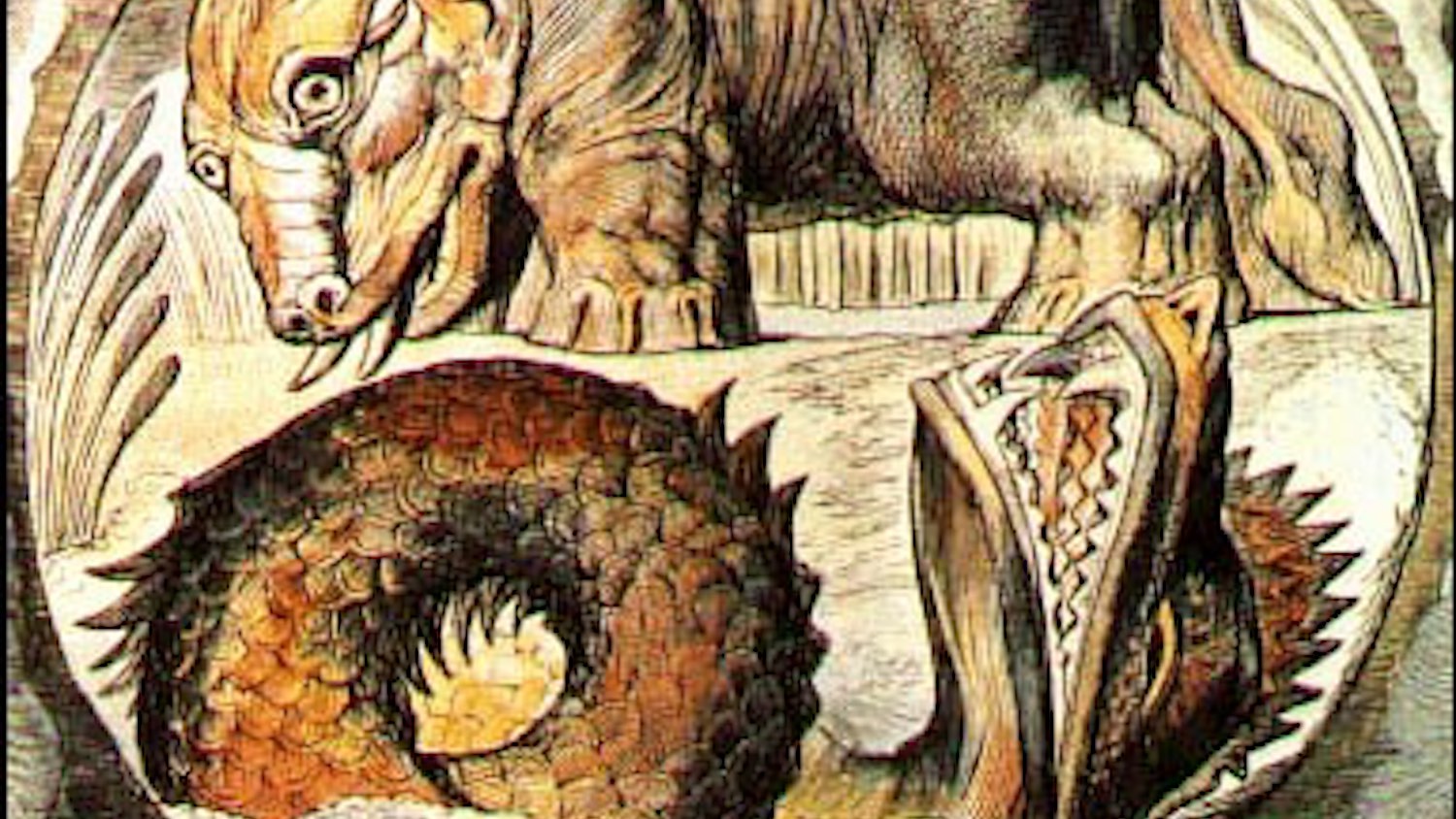 According to Kari Polanyi-Levitt, her father, Karl Polanyi, wanted to call (or called in private) “Behemoth”, his manuscripts written between 1919 and 1922, from the name of a legendary biblical creature.

It is, at least, what we can read in Jérôme Maucourant’s article “Polanyi, reader of Marx” [2009], who got it from Gregory Baum1, who himself quotes vaguely the Karl Polanyi Archives without mentioning the folder(s) and page(s) he saw that. Ana Gomez2, as for her, mentions the archives 01/53, 02/01, 02/02, and 02/03, but, precisely, I don’t see any mention of this name in these archives, but “Helmstreitmüle”3 the name of the pension where he lived and wrote some of his manuscripts.

The first source of this information comes from 1987, in an article by Kari Polanyi-Levitt and Marguerite Mendell, “Karl Polanyi: His Life and Times”, where they noted that “in an unpublished 200 page manuscript written at that time, which he called ‘Behemoth’, Polanyi dedicated himself to the discovery of the origins of the human suffering he so vividly described in “The Calling of our Generation”4, in 1918.5

In the page of the Wiki where I am committed to reconstructing the text or texts that Polanyi wrote at Wien at the beginning of the 1920s6, one can see that we can eventually see only one text, but also two, as Gregory Baum does: “Behemoth” on one hand and “Über die Freiheit” (which I think should be called instead “Ist Sozialismus eine Weltanschauung?”) on other side. Or three, considering that Polanyi wanted to write:

It is also noted that in his masterful biography of Karl Polanyi, Gareth Dale does not quote this “Behemoth” but evokes, for his part, from the correspondence, a “Gegen die wissenschatliche Politik”.

The question therefore remains as to where Kari Polanyi-Levitt (and hence, Marguerite Mendell, Gregory Baum and Ana Gomez) get this title…

From which source could Polanyi have drawn inspiration?

The Behemoth is known in two antic texts.

First source in the Old Testament, at the end of the Book of Job. After he had let Satan tempted Job to prove to the former that man can be faithful, Yahweh (יְהוָ֥ה) / the Lord shows two beasts as example of his strength, one in the earth (Behemoth, בְ֭הֵמוֹת) and in the water (Leviathan, לִוְיָתָ֣ן):

Behold now behemoth, which I made with thee; he eateth grass as an ox.
Lo now, his strength is in his loins, and his force is in the navel of his belly.
He moveth his tail like a cedar: the sinews of his stones are wrapped together.
His bones are as strong pieces of brass; his bones are like bars of iron.
He is the chief of the ways of God: he that made him can make his sword to approach unto him.
Surely the mountains bring him forth food, where all the beasts of the field play.
He lieth under the shady trees, in the covert of the reed, and fens.
The shady trees cover him with their shadow; the willows of the brook compass him about.
Behold, he drinketh up a river, and hasteth not: he trusteth that he can draw up Jordan into his mouth.
He taketh it with his eyes: his nose pierceth through snares.

What could be the meaning of Behemoth for the 1919-1922 manuscripts, so for a Jew recently converted to Protestantism? The idea that the strength of God is stronger than all the human creations, and that only Him decides of the mankind fate? Or that an old force, created by God and protected by him, advances slowly through time and leads mankind towards the messianic times? Socialism, Christianity through Socialism, the Chosen People, a Hegelian „Weltgeist“, the Proletariat as secular Chosen People defined by Marx and Engel?

A Jewish rabbinic legend describes a great battle which will take place between them at the end of time: “they will interlock with one another and engage in combat, with his horns the Behemoth will gore with strength, the fish [Leviathan] will leap to meet him with his fins, with power. Their Creator will approach them with his mighty sword [and slay them both].” Then, “from the beautiful skin of the Leviathan, God will construct canopies to shelter the righteous, who will eat the meat of the Behemoth and the Leviathan amid great joy and merriment.” (Artscroll siddur, p. 719).

Third source, obviously, the Behemoth written by Thomas Hobbes in 1668 (but published posthumously in 1681) at the same time as his famous Leviathan.

Polanyi read Hobbes several times, but I don’t see how the figure of this beast could be used to criticize the strong state depicted by the Englishman in his book, in contrast with a democratic socialist or neo-Greek city…

Through the evocation of this biblical monster, did Polanyi want a kind of anti-Leviathan, and a more religious/esoteric side to the epistemological and sociological criticism that the “Gegen die wissenschaftliche Politik” project sought to make of the political science of his time? If this were the case, in addition to – or instead of – the archives listed by Ana Gomez in 2008, it would be necessary to add to this “Behemoth”, the archives 02/08 and 02/11 for working material and passages numbered from 1 to 38 in archive 02/02.